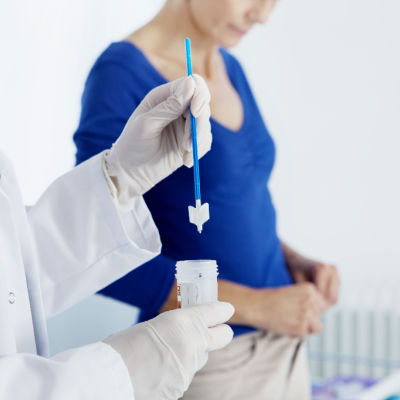 A Pap smear, sometimes called Pap test or cervical smear, is a routine screening done at a gynecologist's office to detect irregularities in and on the cervix. Its name is an abbreviation of its inventor, Greek doctor Georgios Papanikolaou, who developed the test in 1923. It is the most common form of cervical screening in the United States.

Pap smears are in-­office procedures performed by a doctor on an exam table. The vaginal opening and canal are expanded with a speculum; cells are then collected from the outside of the cervix using a tool called a spatula. The procedure itself only takes a few minutes. Some patients report mild cramping or spotting during or immediately following the test, both of which should be brief.

The cervical cells are then transferred to a glass slide and examined under a microscope. The test's main objective is to identify any pre-­cancerous conditions, most of which are caused by sexually transmitted viruses known as HPV. The results, which can take a week or two to come back, can also be used to diagnose other cervical problems.

A Pap smear is recommended every three years for women beginning at approximately age 21 until 65, barring any pre-­existing conditions or previous atypical results; these circumstances may warrant more frequent testing. Regular Pap screenings can reduce deaths from cervical cancer by as much as significantly, provided that patients with abnormal results follow their doctors' recommendations for treatment.